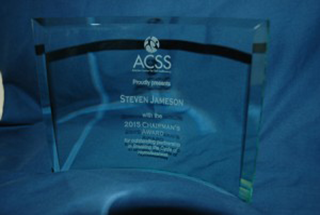 Steven Jameson received the Atlanta Center for Self-Sufficiency (ACSS) Chairman Award, “…given to an organization that has partnered in a significant way with our agency…someone who has been able to add value to our business.”

ATLANTA, GEORGIA – The Atlanta Center for Self-Sufficiency (ACSS) announced its three award-winners at this year’s Impact Breakfast on Thursday, May 21, 2015. Given to the not-for-profit’s primary network constituents, the awards single-out outstanding contributors as Volunteer of the Year, Employment Partner of the Year, and the Chairman Award.

According to President and CEO Dana Johnson, “The Chairman Award is given to an organization that has partnered in a significant way with our agency. It’s not just someone who has volunteered once or twice. It’s someone who has been able to add value to our business. This year we chose Altavi for all the investment that Steven and his team has put into our Salesforce implementation and business process optimization.”

ACSS helps people who are homeless transition through homelessness to become self-sufficient primarily through job readiness and job placement services. Relying on a large network of volunteers/partners/donors, the nonprofit collects a lot of information about its interactions within that network. And its 7-year old CRM could no longer meet the emerging needs of the organization’s 15 staff members and 600 volunteers, not to mention the array of employment partners, donors and above all, the 600 homeless they help bootstrap to gainful employment annually.

The Salesforce implementation aspires to set up a better system to tell ACSS’ story, track engagements with donors, and reduce manual data entry. What is new for ACSS will be optimizing the VIP journey (those helped by ACCS). ALTAVI will help eliminate redundancy and automate documentation/discovery processes. The end result will be a more efficient organization, which expends the same resources to help more people in the Atlanta community recover from poverty.

Dana Johnson led the Impact Breakfast, personally thanking the 100+ in attendance, in addition to the entire network of helping hands ACSS relies on: “Altavi has been awesome. I think Steven really connected to the mission of our organization. He said that when he founded Altavi, it was an important goal to be able to give back, not only with money, but also with time and business. We have been very, very happy with their support.”